Much ink, paper and film has been spent on persuading the English to like Baroque architecture. While I concede that Bernini and Borromini have their place in the universe, I remain uninspired by the one-size-fits-all Baroque makeover that has been inflicted on many Marchigiane churches.

There are still some Romanesque churches around. I find their simplicity far more spiritual than the somehow perfunctory decorations of many later church interiors. A few suggestions follow.

One less well-known church is in the small town of San Lorenzo in Campo, on the Pergolese road.

Abbey Church in San Lorenzo in Campo; crypt, which contains the remains of S Demetrius of Salonica 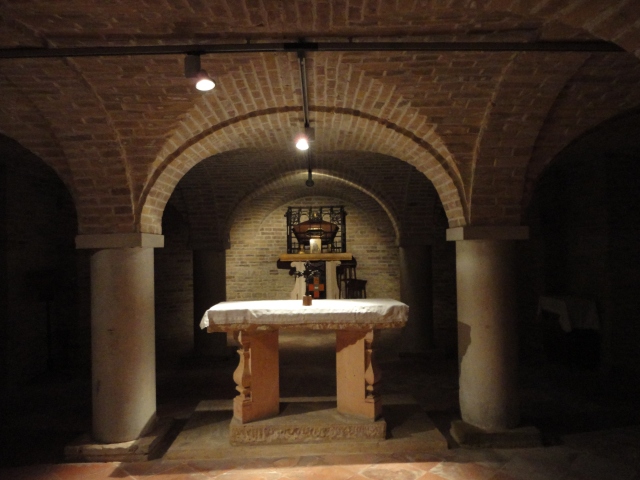 Another view of the crypt

San Gervasio di Bulgaria is another church in the Cesano valley, east of S Lorenzo, on the Pergolese road, below Mondolfo, on the right as you go towards Marotta. 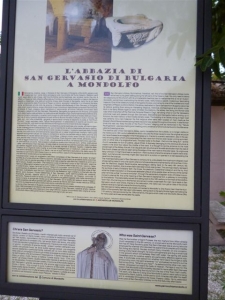 Badia di San Pietro is above Portonovo in the regional park of the Conero, a beautiful, fairly unspoiled, hilly oasis on the edge of Ancona city.

The abbey is now a hotel, but the church is still a working church and open to the public. Here is a picture of a conference at the hotel.

The “chiesetta” (little church), as it is known, of Santa Maria di  Portonovo, is simple and beautiful.

It was recently restored by “Italia Nostra” (the Italian equivalent of the English National Trust) and is now sometimes open as a working church again. Concerts also take place here. Parking at Portonovo in summer is a nightmare and a serious problem for the authorities; come out of season.

Ancona’s cathedral, San Ciriaco,  also has a simple and dignified Romanesque interior. Climb up to it and enjoy the fantastic views.

San Ciriaco from below with the Arch of Trajan

San Vittore delle Chiuse is in Genga, a short walk from the Frasassi caves.

I have a holiday home in Corinaldo in the province of Ancona in the Marche region of Italy. I have been going there since 1993 and would like to share my love and experience of the area. I speak Italian. Ho una casa di villeggiatura a Corinaldo nella provincia di Ancona, Regione Marche. Frequento Corinaldo da 1993 e desidero condividere i miei affetto e esperienza della zona con gli altri. Gli italiani sono sinceramente invitati a correggere gli sbagli.
View all posts by An Englishwoman in Italy →
This entry was posted in Ancona, Architecture, Cesano Valley, Churches, Frasassi Caves, Monte Conero, Romanesque Churches, Valcesano and tagged Architecture, Arts, Italia Nostra, Portonovo, Romanesque architecture, San Gervasio di Bulgaria, San Lorenzo in Campo. Bookmark the permalink.