Inspired by my hero, Mike Duncan, of the History of Rome podcast, I thought I’d list a few classical sites. True to form, not a lot happened in our dear region in antiquity, but there are some sites of interest. There are also some towns where you can’t see a lot, but they have an interesting classical past. Most of these sites are not hilltowns. When the pax Romana came to an end, the inhabitants of the Roman towns on the plains abandoned their homes and fled to the hills, where they built fortified settlements.

Suasa has a story to tell – a story of conquest and dispossession, of the rise and fall of a civilisation, and of people living out their daily lives – working, playing and worshipping for hundreds of years, unaware that one day their civilisation would decline and collapse and their descendants would abandon Suasa and take to the hills.  The town was founded by Rome between 232 and 220 BC.  Roman settlers moved in and divided up the land which had lain fallow and neglected for 50 years, since the battle in 283 BC when Cornelius Dolabella defeated its former inhabitants, the once-proud Galli Senones (Senonian Gauls), conquerors of the Eternal City itself.  Or was the land empty?  Were the defeated and scattered Gauls still living there, just trying to keep their heads down?  Before the Gauls moved in and conquered the region between the 4th and 3rd centuries BC, the Picentes had lived there, as their Iron Age burials, revealed by archaeology, bear witness.  Again, did the Gauls drive out the Picentes or did they just continue to live there as a subject people?  After all, the Normans didn’t drive out the Anglo-Saxons from England after the Conquest.

Where is Suasa?  It’s in the valley of the River Cesano, situated east of the river and just to the north of modern Castelleone di Suasa at Pian di Volpello. You can see on the map that Suasa is called Suasa Senonum, after the Galli Senones, from whom Senigallia, Sena Gallica, also takes its name. 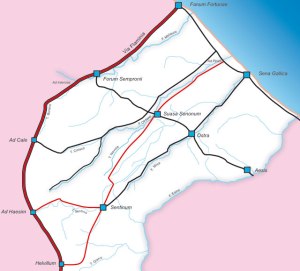 The Roman Road network around Suasa.

Suasa Roman Road;
the Decumanus, or principal street, which was also the main road along the east side of the Cesano valley.

[More detailed stuff for historians, classicists and anyone who’s interested.

Suasa was founded following the Lex Flaminia of 232 BC, which allowed the Ager Gallicus, the former Gallic lands along the Adriatic coast,  to be divided up among landless Roman citizens.

Suasa’s date and location need to be understood both in the context of the river valley and the road network of ancient Rome.

The River Cesano flows north eastward from its source at Monte Catria to the Adriatic between Marotta and Senigallia.

The Via Flaminia was opened in 220 BC.  Its offshoot, the main road along the valley, (Strada Statale 424, the Pergolese) ran west of the river in Roman times, as it still does today, from Cagli(Ad Calem) towards modern Marotta.  Therefore Suasa’s foundation can be dated between 232 and 220 BC.  Had it been founded later than 220 BC, it would have been situated on the other side, the west side, of the river.] 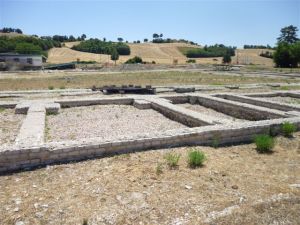 Suasa excavations – remains of shops around the forum

Ancona, the regional capital,  was founded as a Syracusan  colony in 400 BC by exiles fleeing from the tyranny of Dionysus. Syracuse being a Doric colony, the Anconetani are proud of their Doric past and their football supporters (the team is now in Serie D, alas) refer to themselves as I Dorici. Sometimes you see women looking as if they had stepped off a Greek vase. Ancon is the Greek for elbow and refers to the shape of the harbour.  Trajan favoured Ancona and his arch is right out at the end of the harbour.

You can see some of the remains of the amphitheatre up on the hill near the Palazzo del Senato. Not a lot to see, but it has all the overgrown, cat-haunted charm of a Roman ruin.

Ascoli Piceno, capital of the eponymous province, Asculum in Roman times, featured in the Social War (Socius is Latin for ally) of 91-89 BC. They held out against Rome and the city was destroyed by Cn. Pompeius Strabo, father of Pompey the Great, in 89 BC. One can’t help wondering if this courageous stand was really a terribly good idea, as in 90 BC the consul L. Julius Caesar passed a law granting Roman citizenship to all loyal communities and to those who laid down their arms. Interestingly, most of the rest of what is now Le Marche kept well out of it. Pompey’s father still retained clients in the area, as, according to my former tutor Miriam Griffin in the Oxford History of the Classical World,  (Oxford University Press, 1986) Pompey “raised an army of his father’s clients in Picenum and joined Sulla on his return from the East…”

At Fano (Fanum Fortunae) the Via Flaminia reaches the coast. You can still see the Arco di Augusto, though it is missing its attic.

Just below Fano the river Metauro (Metaurus) reaches the sea, and is crossed by a somewhat embarrassing (to the English, anyway) Fascist-style triumphal bridge, which I think commemorates the site of  C. Claudius Nero’s  defeat of Hasdrubal, Hannibal’s brother, in 207 BC. The actual site of the battle is the subject of scholarly debate: http://penelope.uchicago.edu/Thayer/E/Roman/Texts/secondary/journals/EHR/13/Metaurus*.html

Having found a leaflet about a past exhibition, Potere e Splendore, gli antichi Piceni a Matelica , and a useful website, http://quintaregio-picenum.it.gg/Home.htm  ,I am now able to tell you a bit more about the Piceni or Picentes.

According to  the classical sources, Strabo and Pliny the Elder, the Piceni or Picentes were of Sabine origin. Strabo (book V,4,2) says that they were led from their native Sabine country to Picenum by a woodpecker (picus in Latin), which bird they regarded as sacred to Mars. Pliny, (book III, 108-111) on the other hand, does not refer explicitly to the woodpecker, but says Orti sunt a Sabinis voto vere sacro: “They originated from the Sabines, following the vote of a sacred spring”.

The Picene civilisation flourished from the beginning of the Iron Age (c 10,000 BC) to the end of the fourth century BC, on the Adriatic coast , bounded by the rivers Foglia to the north and Pescara (according to Pliny) to the south, and by the Appenines to the west. Although the exact boundaries are debated, this delineation seems to be the most widely accepted.  Because of the “comb-shaped”nature of the Region, divided up as it is by rivers, no one capital or leading group developed (which makes the Roman conquest of Italy  let alone the Empire, all the more amazing). The majority of archaeological finds are located in the area of the Augustan Regio V Picenum, which is not coterminous with the area inhabited by the Piceni. Most of our knowledge of the Piceni comes from archaeology: graves (the majority), dwellings and places of worship, and indeed, most of the exhibits in Potere e Splendore were grave-goods.

Inside the Furlo tunnel in the course of the Via Flaminia Antica near Fossombrone in Marche in Italy. (Photo credit: Wikipedia)

where the Via Flaminia runs through a tunnel cut through the rock by Vespasian in AD 76, and the Gallic town of Senigallia http://www.comune.senigallia.an.it/senigalliaTurismo/index.html with interesting and well-presented excavations below the theatre. I have given the Italian link because the English translation is so poor, though by no means the worst I’ve read.

I have a holiday home in Corinaldo in the province of Ancona in the Marche region of Italy. I have been going there since 1993 and would like to share my love and experience of the area. I speak Italian. Ho una casa di villeggiatura a Corinaldo nella provincia di Ancona, Regione Marche. Frequento Corinaldo da 1993 e desidero condividere i miei affetto e esperienza della zona con gli altri. Gli italiani sono sinceramente invitati a correggere gli sbagli.
View all posts by An Englishwoman in Italy →
This entry was posted in Ancient Rome, Ancona, Archaeology, Marotta and tagged Castelleone di Suasa, Fano, Marche, oxford university press, Picentes, Pompey, Roman, roman ruin, Rome, Senigallia, Suasa, travel, vacation, Via Flaminia. Bookmark the permalink.