The Englishwoman in Corinaldo; a personal take

Corinaldo Porta di Sotto, one of the town’s main gates

Chances are this will be the first gate you see. You can go in this way and walk up the steps, seen here from the top. They are very steep so don’t do this every time. 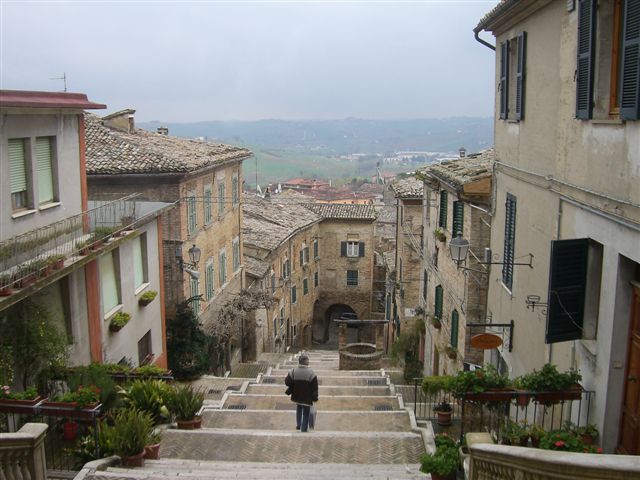 Legend has it that a not-so-bright citizen dropped a sack of cornmeal into the well (Pozzo), which you can see about seven steps down, thus creating the eponymous polenta.

At the top of the steps, on the left, is the Comune building, or town hall. This was built to rival the Augustinian convent opposite. Walk along its classically harmonious portico

and enjoy the view therefrom. Many’s the time I’ve come this way to do business in the Comune though I’ve also come here to be shown some less well-known corners by a very busy official who kindly spared me his time. After dealing with the official paperwork, I treat myself to this view from the far end. 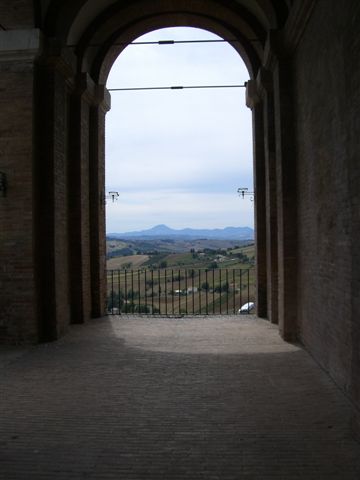 In this part of Le Marche, which is hilly rather than mountainous, there is no building stone and one of its delights is the local brick’s many soft shades of terracotta .

We always call in at the IAT (tourist office), opposite the Comune, to see what’s on and chat to the charming assistant who speaks excellent English. Here you will find various tourist guides and leaflets, including a guide to the walk round the walls, the best way to see the town. But read my remarks on opening times and the Italian way of life before you embark on either visiting IAT or walking round the walls.

Read my post on caffès in Le Marche. Some local establishments aren’t really for tourists or foreigners. We tend to allocate our patronage to three establishments.

First, the Chiosco, or kiosk, (their WC is for public use and very clean) just outside the north corner of the walls, opposite the tower called Lo Sperone and above the Porta San Giovanni.  The barmaid is invariably polite and pleasant, though she works long hours and must get very tired. This is a good place to see the life of the town going on, as it is near the main parish church of San Francesco, the Farmacia Comunale (muncipal pharmacy) and the road around the walls. Here you can enjoy looking on at local festivities such as weddings and First Communions.

The crowds are waiting for the bride.

The Caffè del Cors is near the banks, the hairdressers, the Comune, and the IAT, so people tend to pop in here for a quick coffee around 10 or 11 when they have run their errands. They also serve a fishy lunch. Here you can buy your stamps and postcards from the post office/tobacconist/stationer’s opposite, write them and then post them in the box on the wall of the Comune’s portico.

At the top of the Steps, and consequently popular with tourists, is the Osteria de Scuretto – see my post. It’s also a good place for seeing the life of the town, as it’s across the square from the laundry and at the end of Via Cimarelli, a street with lots of shops. They serve an excellent lunch consisting of either a tagliere (chopping board) with a good selection of cold cured meats and cheese, or a delicious plate of pasta.

One is the Corinaldo Market (not a market; a local grocery), under the walls, near the Porta di Sotto  in the Costa del Gioco di Pallone. NB It doesn’t open in the afternoon till 4.30. If you want to take produce home, the Signora  will slice and vacuum pack it for you. The other is the butcher’s (Bruciati) in the same street, a few doors down. They were only open in the morning (8-12) last time we were there.  The butcher kills and cures his own meat, using only salt. We buy freshly-made pasta in a pastificio in Via Cimarelli, 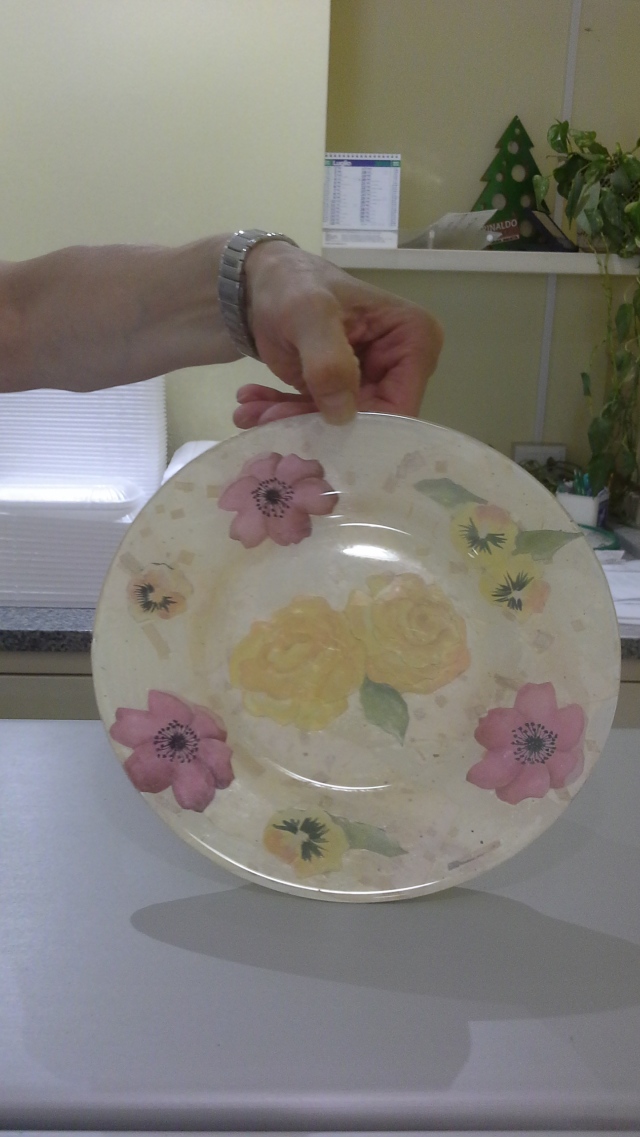 and in the same street there is a greengrocer (frutta e verdure) which also sells tasty ready-cooked vegetable dishes.

Eating
The Tigli – see my recent post – (closed on Monday) is a beautiful restaurant in a former convent built into the walls. If you book in advance or arrive early enough on summer evenings you can eat outside on the terrace. The menu is good traditional local cooking; go for pasta and the nodino di vitello. The 9 Tarocchi  (closed on Wednesday), also built into the walls, serves traditional local food too, including pizze, but with a modern twist. The Nova Taberna, halfway up the Steps, has only recently opened . The menu is limited and the cooking is good, in a modern Italian style, and there is always a vegetarian choice. The young couple who run it spent some time in Cork, in Ireland, and speak English.

Theatre
Teatro Goldoni
Another small, charming theatre recently reopened. For what’s on try visiting the communal website or the local newspaper, posters, the IAT and the theatre itself.

Library
You can use the internet here for free, though the connection doesn’t always work. There are some fine antiquarian books – see the post in my other blog – going back to the 16th century, (the helpful librarian will show them to you) and the Corinaldo section of the Catasto Gregoriano (early C19 property register, consisting of maps and explanatory notes). The communal archive is attached to the library – visit by appointment.

Festa
Pozzo della Polenta (Well of Polenta). Takes place on the third weekend in July to commemorate the town’s successful resistance to Francesco Maria della Rovere’s (the Duke of Urbino’s) siege of 1517, and the local folk tale mentioned above.  A good one with all the trimmings.

If you get the chance, go to one of the flag-waving (sbandieratori) shows. Sbandieratori are an important part of central Italian culture, although like most English people I’d never heard of them before I came to Le Marche, and this group, Araba Fenice, travels all over the world with their shows. They are spectacular! 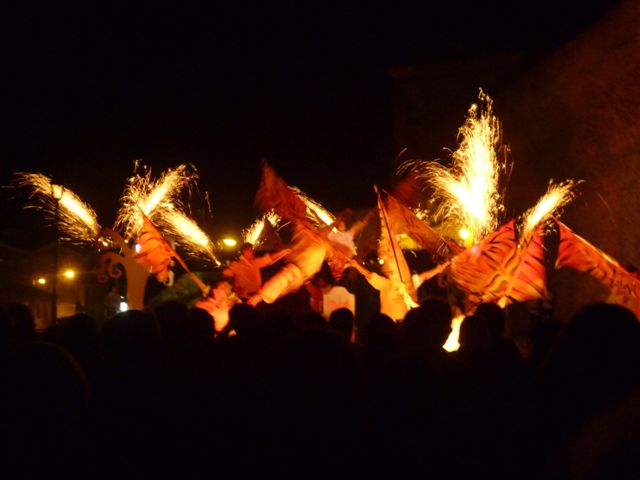 I have a holiday home in Corinaldo in the province of Ancona in the Marche region of Italy. I have been going there since 1993 and would like to share my love and experience of the area. I speak Italian. Ho una casa di villeggiatura a Corinaldo nella provincia di Ancona, Regione Marche. Frequento Corinaldo da 1993 e desidero condividere i miei affetto e esperienza della zona con gli altri. Gli italiani sono sinceramente invitati a correggere gli sbagli.
View all posts by An Englishwoman in Italy →
This entry was posted in Corinaldo, Entertainment, Food and drink, Hill towns, Libraries, Theatre, Vacation, Where to eat and tagged Corinaldo, Hill town, Italy, Le Marche, Living in Italy, Tourism, travel, vacation. Bookmark the permalink.

8 Responses to The Englishwoman in Corinaldo; a personal take