The Englishwoman celebrates with memories, flags and dancing

The 9 Tarocchi (Tarot cards) in Corinaldo is one of our favourite restaurants and on Friday 1 August they celebrated the 50th anniversary of their opening. The restaurant was founded in 1964 by a group of young people, in their 20s, I’d say, and we were privileged to hear a conversation, moderated by the mayor, among the various owners of the restaurant through time, particularly its founding fathers. 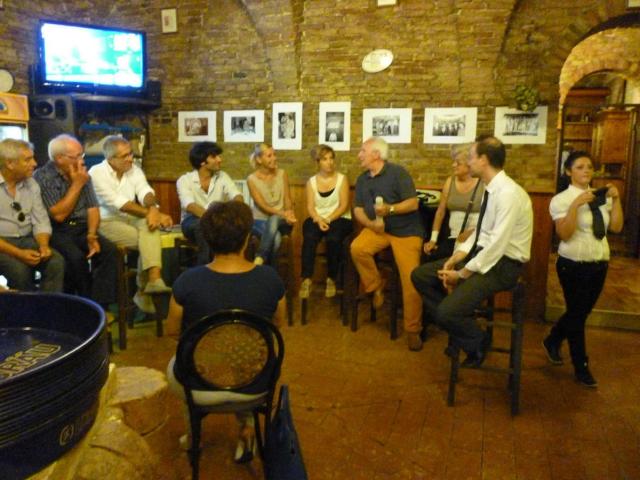 Sharing memories of I 9 Tarocchi. Fourth from left is the mayor, Matteo Principi, and on his left is Giorgia Fabbri, the Assessore alla Cultura (Portfolio-holder for Culture). Seated at the far right is the current owner.

I started to take notes and one of the group saw me standing and scribbling, somewhat awkwardly, on a piece of paper resting a high shelf. He kindly invited me to take a seat in the circle of speakers, so I had a special place. As your resident blogger I take my duties seriously, so I was a bit concerned that I couldn’t follow everything they said. (I hope this was being recorded for the benefit of future generations.) They weren’t using pure dialect, but I think there were lots of local turns of phrase. Also we had missed the beginning. I must admit we assumed it wouldn’t start on time, not being either a football match or Mass.

I was particularly impressed by the enthusiasm with which the founders spoke of their early days and the fun they must have had. The restaurant started as a simple tavern for the young Corinaldesi, a welcoming social centre. I also got the impression that, having flung themselves into the venture with youthful enthusiasm, they had then had to cope with the realities of finance. One of their number was the administrator who had kept them on the straight and narrow. One problem was that they didn’t have a licence, so they simply acquired one from another local osteria. Perhaps not surprisingly, that osteria isn’t there any more!

There followed a wide ranging conversation with lots of laughs. I’ll pick out the reminiscences of Signora Chiara, the widow of Fausto of I Tigli Restaurant. Their move to I 9 Tarocchi was a big step for them and an important part of their family history. They opened without many changes at first and attracted lots of people, mainly out of curiosity. There was no pastrycook then and they had their pastries delivered from Senigallia. They may have come from (relatively) far but they went down well with the local ladies. Rather than being just a bar/caffè/pasticceria, they opened a kitchen and a pizzeria. At first their customers were local lads, then local ladies and gentlemen, then people from out of town and passing trade. Although there was a bit of initial prejudice because Fausto was from Senigallia, the couple found Corinaldo welcoming and soon the Corinaldesi grew to esteem and like Fausto.

At this point a former waiter intervened to say that he had worked with Fausto for some years and Fausto had been like an elder brother to him.

There was general agreement that though times had changed, the place hadn’t. The mayor asked if the restaurant was more for locals or tourists, and the current owner, who has been there for 10 years and really values serving original and well-cooked dishes, thought that in the summer there were more tourists. In his final remarks the mayor observed how important it was to give young people a space and to put one’s heart into one’s work. He added that the evening had been a good example of the vivacità (liveliness) of the Corinaldesi and how they like to joke.

Time to enjoy the entertainment.

We were treated to an impressive display of flag-waving, accompanied by drumming, by the young people of Combusta Revixi (freely translated as “I arose from the ashes”), the other local group of sbandieratori. 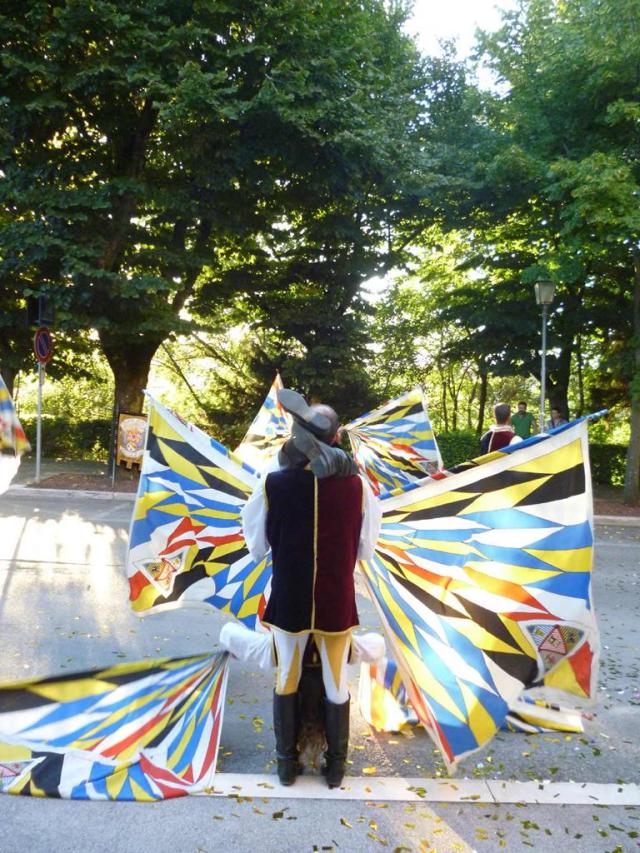 Sbandieratori celebrate 50 years of I 9 Tarocchi 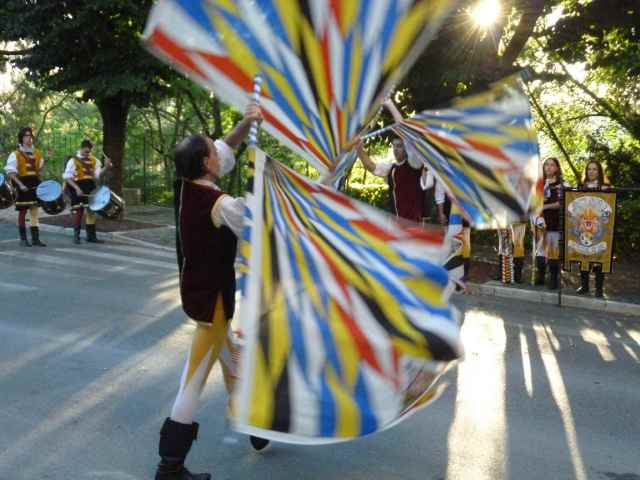 One tiny girl in the audience much enjoyed it and capered about on her short sturdy little legs, clearly under the impression that she was dancing – and so she was.

There followed a hearty meal, good value at E15 for two generous courses including a tasty portion of Vincisgrassi, the local version of lasagne. There was a good turnout, lots of local people were there and the beautifully turned out waitresses were constantly on the go. We admired their hard work and professionalism. 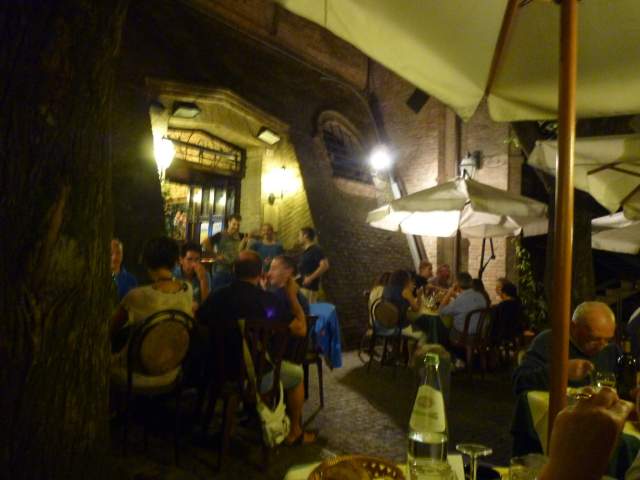 Celebration dinner at I 9 Tarocchi

After the meal there was dancing to music played by a DJ, one of Romagna’s best, we were told. Eventually he did get a crowd on to the dance floor 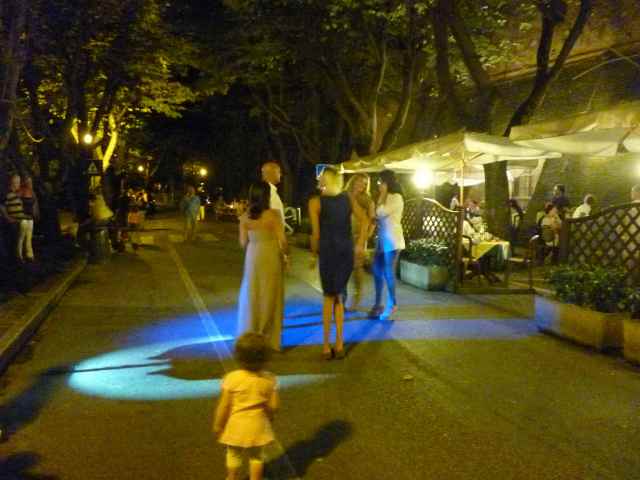 and everyone had a great time. (Well, the mayor did say the Corinaldesi were vivaci.) We were all dancing enthusiastically and flinging ourselves into it. I felt that we were seeing Corinaldo scatenata – Corinaldo unchained. 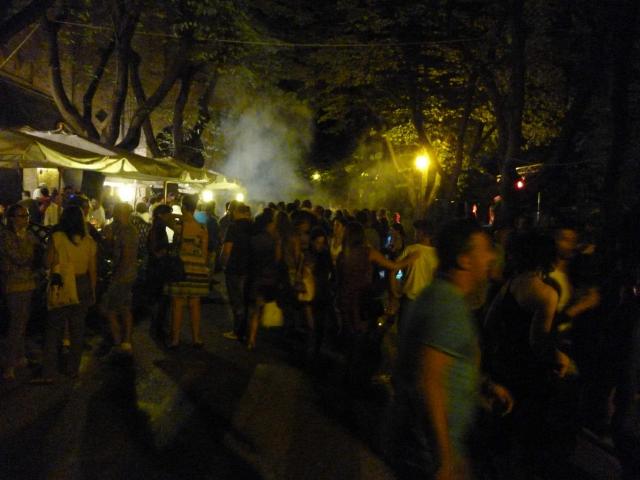 Dancing in the street

I have a holiday home in Corinaldo in the province of Ancona in the Marche region of Italy. I have been going there since 1993 and would like to share my love and experience of the area. I speak Italian. Ho una casa di villeggiatura a Corinaldo nella provincia di Ancona, Regione Marche. Frequento Corinaldo da 1993 e desidero condividere i miei affetto e esperienza della zona con gli altri. Gli italiani sono sinceramente invitati a correggere gli sbagli.
View all posts by An Englishwoman in Italy →
This entry was posted in Borghi dell'entroterra, Entertainment, Food and drink, Hill towns, Rock 'n' roll and tagged 50th anniversary, Corinaldesi, Corinaldo, I 9 Tarocchi. Bookmark the permalink.

2 Responses to The Englishwoman celebrates with memories, flags and dancing