Why had we taken so long to visit the well-known Romanesque churches of Sta Maria a Piè di Chienti, and S Claudio al Chienti? Because the River Chienti is some way to the south of us in the province of Macerata,and it’s no fun driving down a two-lane autostrada which is being converted to a three-laner (that’s the long stretch between Ancona Nord and Ancona Sud) . The temporary lanes are narrow, the fast lane is populated by drivers of black BMWs exerting the Italian male’s birthright of driving his car at 160kph in the fast lane, and the slow lane is populated by Greek lorry-drivers who hoot at you if you brake or slow down to preserve life and limb.

However, a lorry-free Sunday came round and we had started to think that there are fun alternatives to reading and/or drinking Prosecco on the terrace. “Anyway,” I said, “I need something to put in the blog.” It has taken over from the children’s school Newsbooks as the dictator of our holiday activities. So we set off down the motorway, and then turned west along the superstrada (four-lane highway, toll-free) to Macerata through the pleasant valley of the Chienti, with hills rising on either side of the woods and fields of sunflowers, and the distant view of the Appenines which you can always see wherever you are in Le Marche. We passed a few gracefully symmetrical, tree-lined avenues , one of which was our road to S Claudio.

When we arrived we realised that a wedding 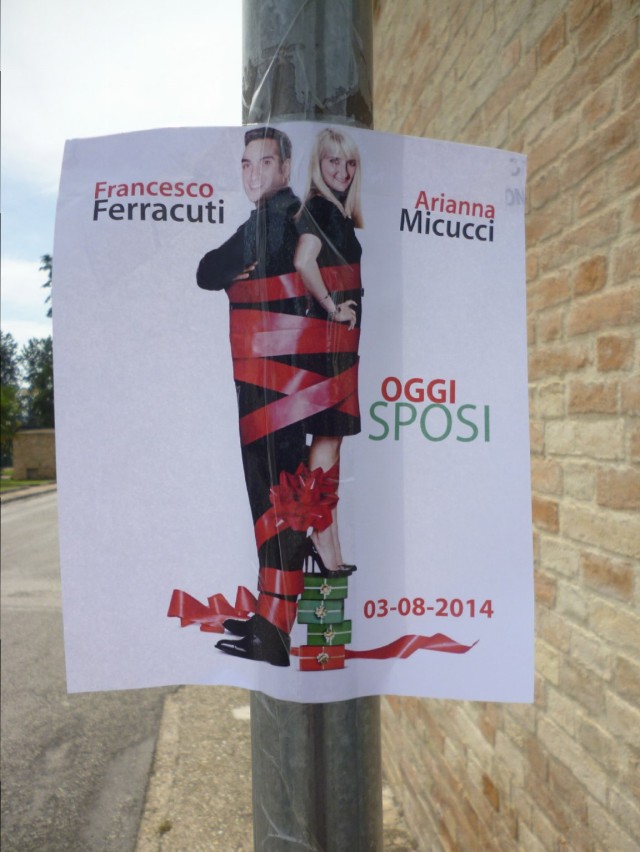 was soon to take place in the church, so we quickly popped into the lower storey and looked round the simple, harmonious interior while it was still practically empty.

To be honest we were a bit disappointed that we couldn’t get a proper look at the place, but this was soon outweighed by the interest of the guests’ arrival. Only one woman was wearing the sort of formal summer print that we English associate with weddings, and she looked most elegant in her simply cut dress. The other guests were wearing our idea of evening party clothes, or smart casual trousers and tops.

We waited patiently for the bride to arrive – the guests must have been getting very hot and uncomfortable, but they smiled on. And then –

Walking down the path to the church.

Once all the guests had gone into church, we took the opportunity to wander round and get some proper photos of the church.

We also had a look at the upper storey, which seems no longer to be used for services, as it was empty apart from a lectern, a screen and a few chairs. I tried to climb the spiral stairs up into the turrets, but they were blocked off.

This quiet hamlet is also home to a Juventus youth development centre (I hope it is still operating, because I couldn’t find it on their website), which is located next to a little primary school. We saw an inconsolably disappointed little boy crying, presumably because his Juve heroes weren’t on view.

All this had taken quite a long time, but we decided to make for Sta Maria anyway, in the hope that it would be open. We drove along the strada provinciale this time, a quiet country road, and arrived in the modest settlement of Montecosaro Scalo, strung out along the road, and eventually spotted the turn-off to the right that led to Santa Maria. Not to our surprise, it was shut – closed at twelve and it was about five past. Several Nordic families of tourists were turning gloomily away. After wondering what to do for a few moments, I experienced a lunch-shaped lightbulb moment and dragged my driver/photographer off (he was a bit mutinous) on his least favourite pursuit – looking for lunch on Sunday in provincial Italy.

Having dismissed a few uninspiring and closed-looking places near the church, we drove to Montecosaro, the nearest hill town, and parked outside the walls. We walked under the arch of the old gateway and through winding alleyways and, just I was starting to despair and feel terribly guilty towards my driver, we saw a Hotel sign. I went in and asked about lunch – yes, the hotel had a restaurant which was open and a short walk away, under the Palazzo Comunale. By now it had started to rain, so it was with great relief that we arrived at the La Luma restaurant and were welcomed in. Our relief was only slightly diminished by the fact that we were the only customers, and by the sight of the prices on the menu – but there was no alternative and anyway the venue, a fine vaulted chamber,and the polite and professional waiter, who spoke excellent English, were inviting. Also there was quite a reasonably priced set menu, which turned out to be cooked and served with exquisite care and attention to detail, including the half-dozen or so different kinds of home-made bread and the free amuse-gueules or stuzzichini to start with.

We got chatting to the only other couple there, North Americans who were staying at Montecosaro for the Macerata Opera season. So, if you are visiting Le Marche for that, the hotel looked like a good place to stay with views over the hills and valley, and its restaurant is a good place to eat. The waiter offered to show us the wine cellar,which was actually next door to the dining room, and we gazed in wonder at the pre-war bottles of French wine, and admired the table spread with the other goodies produced by the restaurant.

We also spotted some interesting photographs on the wall – in fact the waiter directed us to this mock-heroic poem “A Morte la Minestra!” (To Death with Soup!), by Giacomo Leopardi (1798-1837), Italy’s greatest Romantic poet, according to the Oxford Companion to English Literature. He wrote these lines at the age of 11.

Start up Helicon, O muse of song, And gird your lyre with a laurel crown, Now you are not to sing of heroes or gods, But only load Minestra with insults. Now you, Minestra, are the object of my verses, And to call you abominable gives me great delight.

O food, welcomed in vain by our human race! Food neglected and vile, worthy only of a humble peasant! [Leopardi was only 11 and a Count.] It is said that, when good, you resuscitate the dead, But the pleasure is worthy of those who really aren’t paying much attention.

So do we have to be dead to enjoy These benefits, which are said to be yours alone? Is there nothing for the living? Yes! everyone answers me; So go on and show me, if anybody can; But you are silent! Someone furious begins to speak; But we remain attentive and quiet, to hear: “Who can call a delicate food vile, Which is often the only restoration for a poor, sick person?”

It is true; but whoever may wish to be healthy, thank Heaven, Should leave such food for a poor unhealthy person! Don’t you think it’s a petty irritation every morning To have to force “nice light soup” down your throat?

The second poem we found, below, is by Giorgio Umani (1892-1965), poet, entomologist and lawyer of Cupramontana. He is also credited with persuading the German occupying commander not to execute his (Umani’s) fellow-citizens in reprisal for a partisan action in 1944; however, I can find no source or corroboration for this story. It may well be true – I’m just warning you!

Lines in praise of the Marchigiani.

O Marchigiano, ant of Italy, you who eat for half a person and work for three,  who tighten your belt round your stomach and don’t stretch your hand out; O Marchigiano, the  poor relation of  every neighbour who accepts your corn, who judges  your wine worthy, and then passes by disdainfully on the other side; there is nobody to offer you a coffee, but everyone knows which is your door if there is a mouthful to enjoy at your home. O Marchigiano, subtle of intelligence, poor [?] in money and rich in talent, you pick up your paintbrush and your name is Gentile [da Fabriano], your name is Raphael, you sing, and your name is Gigli. However there is an art, which you, of the stock who gave you Bramante, who gave Spontini, Leopardi and Rossini, will never know: the art of selling your goods well.

You, where others push themselves forward, elbowing furiously, only know the art of standing aside, the art of being behind the scenes, always ready to give way, always prepared to cover powerful incomers with flowers. O Marchigiano, who, if will and understanding were money, would be born a banker, why do you mistake brambles for laurels in foreigners’ houses , you who have among your roses the most beautiful things in the world, the Conero and Portonovo, Furlo, Frasassi, the Ducal Palace of Urbino and the Cappellone [St Nicholas’ chapel in the Basilica] of Tolentino? I say! but even the Blessed Virgin Mary, as soon as she in secret had glanced at the world, came home to Loreto!

Also on display in “La Luma”; note the signature.

After our excellent lunch we walked back to the car via this little theatre, one of the many with which Le Marche’s hill towns are blest. 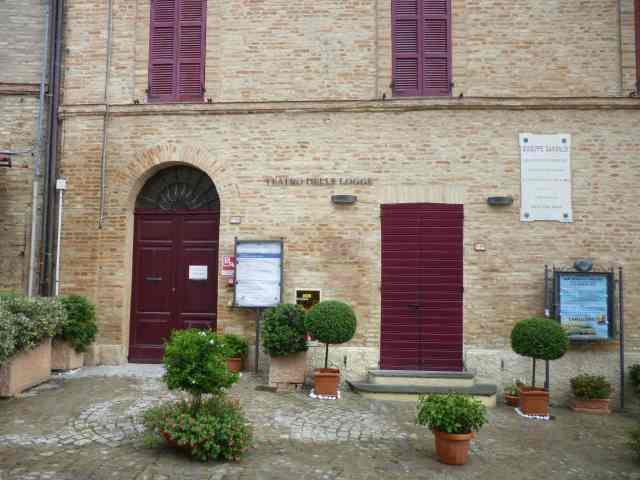 We drove back to Montecosaro Scalo, hoping we’d be luckier this time, and found the church open.

Sta Maria a pie di Chienti; the west front is a C17/18 addition.

The interior is larger, with two dark side aisles

Sta Maria a pie di Chienti: altar with the Angel Gabriel announcing to Mary that she will be the mother of Jesus.

and somehow more confident. The upper storey is still in use for worship, and while we were sitting quietly there, a man approached us who obviously wanted to communicate something It turned out that he subscribed to the theory that San Claudio al Chienti, not the cathedral in Aachen, was Charlemagne’s burial place, and that the valley of the Chienti was the early medieval Francia. I’m not inclined to agree with it myself, as I think Charlemagne wanted to be buried in his home area.

So we headed home, replete with churches, food and poetry. You can always have a good day out in Le Marche.

I have a holiday home in Corinaldo in the province of Ancona in the Marche region of Italy. I have been going there since 1993 and would like to share my love and experience of the area. I speak Italian. Ho una casa di villeggiatura a Corinaldo nella provincia di Ancona, Regione Marche. Frequento Corinaldo da 1993 e desidero condividere i miei affetto e esperienza della zona con gli altri. Gli italiani sono sinceramente invitati a correggere gli sbagli.
View all posts by An Englishwoman in Italy →
This entry was posted in Architecture, Churches, Romanesque Churches, Theatre, Where to eat and tagged Charlemagne, Giorgio Umani, La Luma, Leopardi, Montecosaro, San Claudio al Chienti, Santa Maria a pie di Chienti. Bookmark the permalink.