Lunch in Fossombrone at the Caffe’ del Corso

Our friends in Serrungarina recommended this caffè to us as a good place to eat as well as drink. We had already had coffee there and were impressed by the decor and the staff, so we were happy to give it a go. Apparently it has recently been re-invented as a restaurant as well as a caffè. The Fossombrone Corso is also a pleasant place for a stroll, though  at lunchtime it was fairly quiet.Everyone was having lunch, not doing their lunch-hour shopping as they would in England (NB It might be busier in term-time). Italians shop before or after work, as you can tell from shop opening times. In summer they may shop more before work, as it’s not too hot then. After work you can combine shopping with the passeggiata (stroll up and down the main street and greet your friends), though we don’t see much of a passeggiata in Corinaldo.

The restaurant was fairly quiet too. Some local ladies had met up to have lunch together, which we thought was a good sign, and an Italian touring couple with their very well behaved large dog turned up later. We were all sitting outside, hence the dog.

A propos of the touring couple, Italian cultural tourism in Italy is a post-1950s phenomenon. In Rome in the 1950s, my mother remembers how people in the countryside around Rome would express amazement at anyone wanting to see the scavi (excavations, i.e. archaeological site). Ostia Antica was an exception; it was a popular weekend destination for Romans, and we used to see smartly-dressed girls in full skirts and high heels on the backs of their boyfriends’ motor bikes. I used to wonder how they got round the rough pathways and dusty walls without ruining their shoes and clothes.

Returning to Fossombrone in the twenty-first century, the food was excellent and very elegantly served. The chef had tried successfully to inject a bit of originality into good traditional Italian food. Unfortunately I can’t remember exactly what dishes we had, but we photographed them and I have done my best to identify them for you. 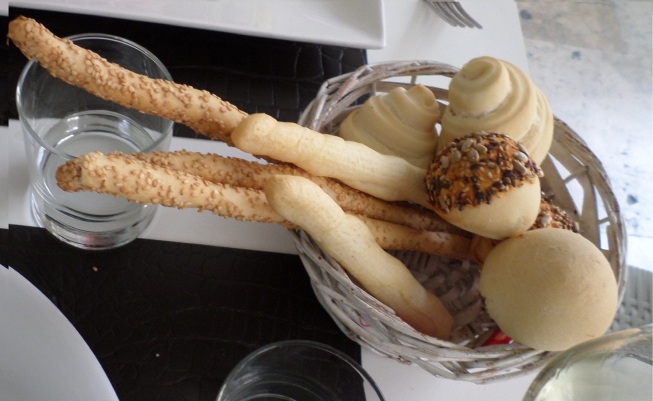 Bread at the Caffe’ del Corso

We are not big fans of the local bread, so this home-made selection was a good sign and welcome. It tasted as good as it looked. 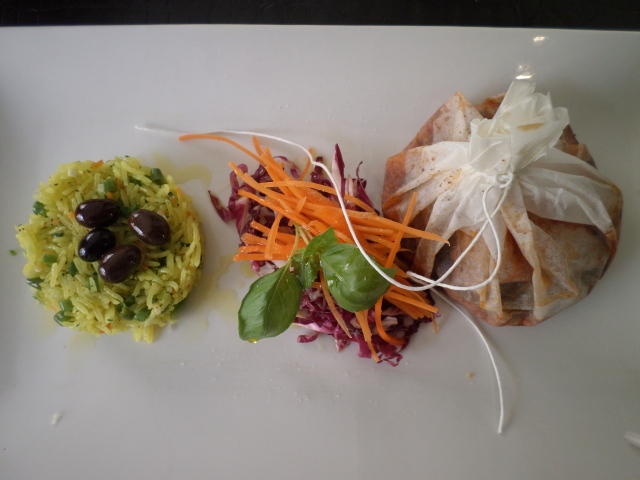 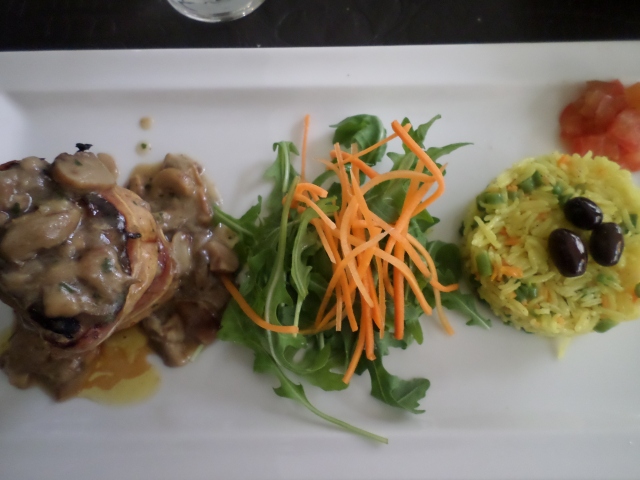 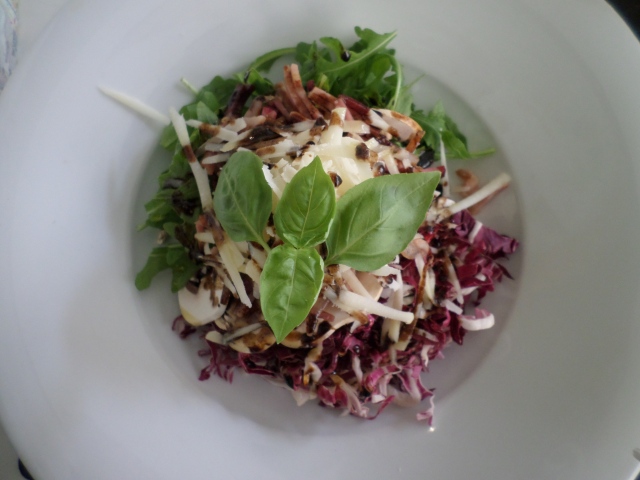 I think this was insalata mare – seafood salad.

In a rather un-Italian way we didn’t have a primo piatto, pasta or risotto. Traditionally lunch was the main meal at home in Italy, when pasta or risotto was served followed by the main dish of fish or meat. For supper at home, pasta in brodo – tiny pasta shapes in bouillon – might be served, followed by something a bit lighter than at lunch, such as deep-fried courgette flowers. That is what we used to have for supper at my pensione in Perugia in 1970. The boys used to complain about it a lot, and I must say I thought it wasn’t really enough. Restaurants certainly don’t serve lighter food in the evening nowadays, if they ever did, and I wonder if people still follow that pattern of eating at home? 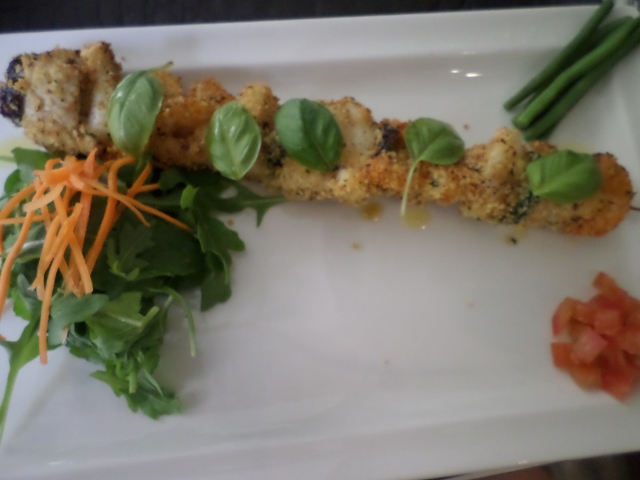 As for the wine, we treated ourselves to a 75 cl bottle of the local wine, which in those parts is a Bianchello del Metauro. Actually in restaurants I really prefer to order a half-litre of the house wine, which is always at least ok and usually good. Furthermore, half a bottle is three glasses. That can be too much in the middle of the day, unless you are heading straight home for a lie-down.

I seem to have survived the extra glass that time, as we then went for a stroll along the Corso, photographing attractive details of the architecture, and window-shopping. 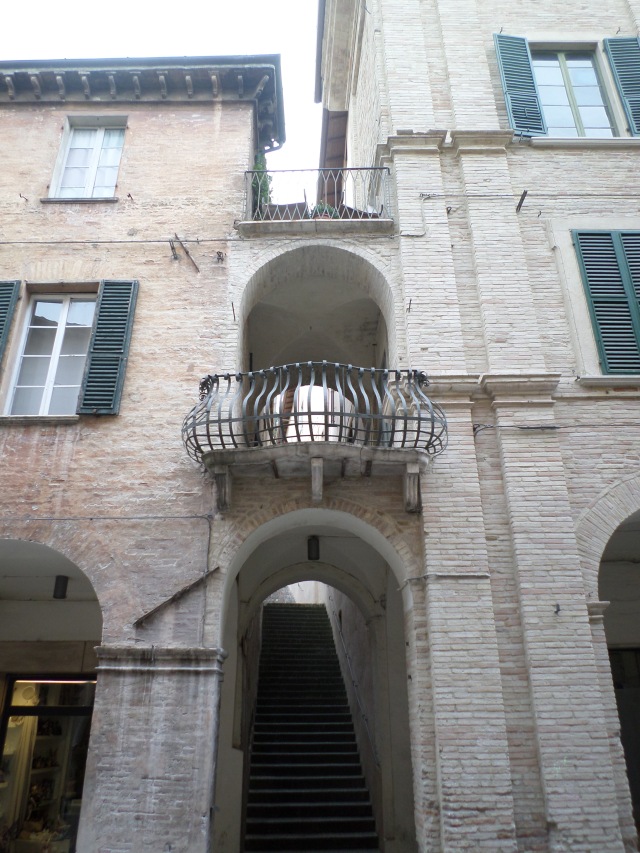 We loved these arches above and below the wrought-iron balcony. 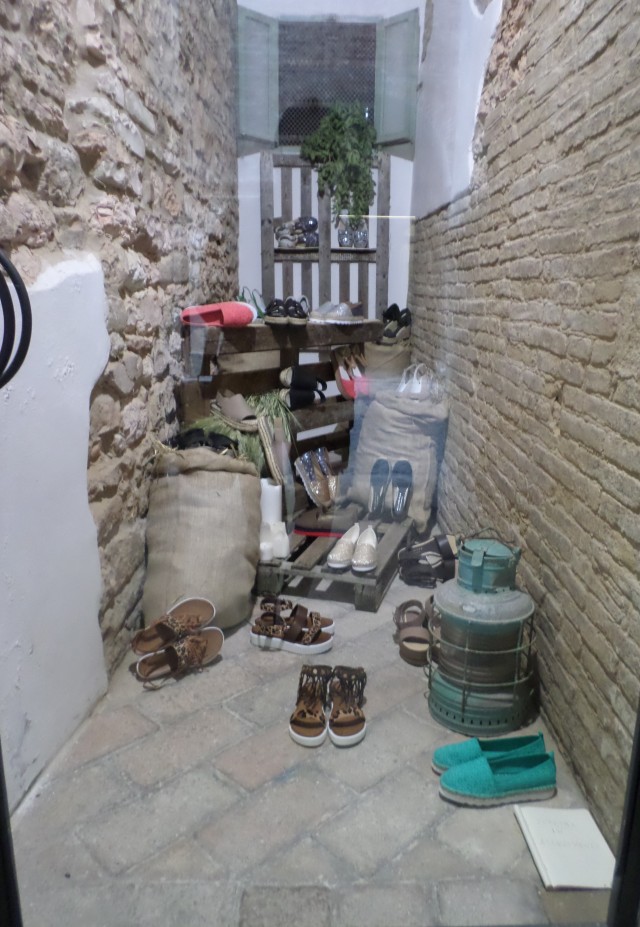 What could be more recherché than this shop window? How better to display about two dozen pairs of shoes than to drape them artistically about a farm store-room? The red espadrille doesn’t seem to have a pair, but that’s not the point. Note the mattoni a vista, exposed bricks, complemented by the cunningly placed patches of plaster. This is very typical of Italian restoration of old buildings. 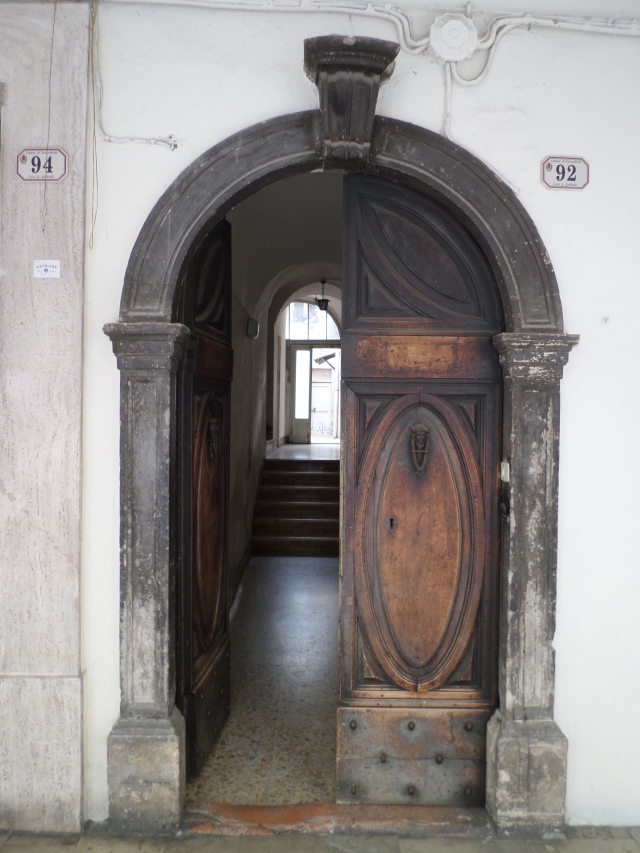 These half-open doorways seem to beckon you in. 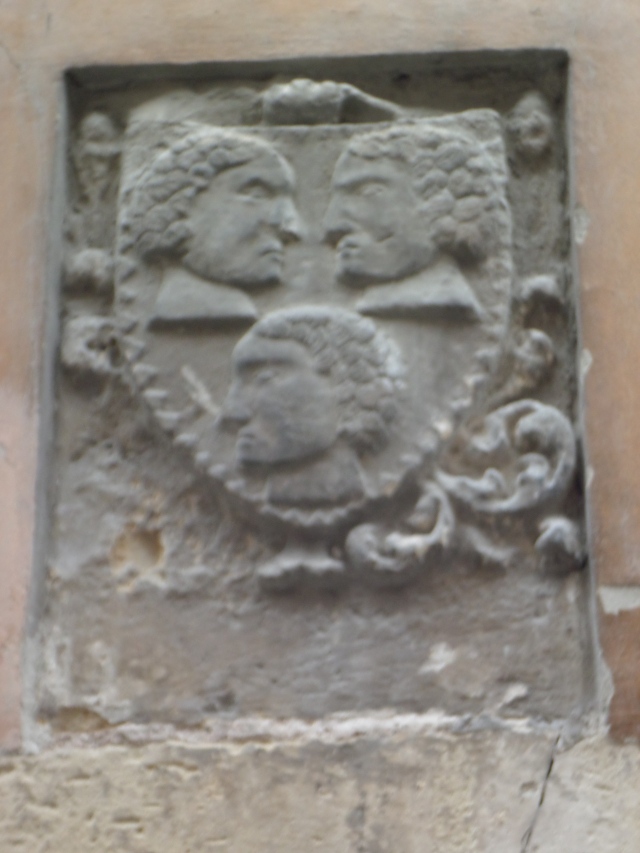 Hmm, this one’s a bit fuzzy – must have been the wine. Should have asked the Chelsea Fan to take it. Anyway I thought you’d rather see it than not. Next time I want to photograph I’ll insist on a half-litre.

I have a holiday home in Corinaldo in the province of Ancona in the Marche region of Italy. I have been going there since 1993 and would like to share my love and experience of the area. I speak Italian. Ho una casa di villeggiatura a Corinaldo nella provincia di Ancona, Regione Marche. Frequento Corinaldo da 1993 e desidero condividere i miei affetto e esperienza della zona con gli altri. Gli italiani sono sinceramente invitati a correggere gli sbagli.
View all posts by An Englishwoman in Italy →
This entry was posted in Architecture, Food and drink, Shopping, Where to eat and tagged bianchello del Metauro, Caffe del Corso Fossombrone, Fossombrone, Ostia Antica, Perugia. Bookmark the permalink.

3 Responses to Lunch in Fossombrone at the Caffe’ del Corso