I can’t resist sharing this quote from Civilisation, by Kenneth Clark, art historian, (rich, leftish, money from Clark’s cotton reels), father of the [more?] famous Alan Clark, politician and diarist, (rich, right-wing, money from Clark’s cotton reels), about Giovanni Santi, artist, father of the more famous artist, Raphael. “The court painter was a silly old creature named Giovanni Santi, the sort of obliging mediocrity who is always welcome in courts, even in the court of Urbino.  No doubt the ladies, when they were in need of a design for embroidery, used to say “Let’s send for dear old Mr Santi” – and when he came he brought with him his beautiful little son, Raffaello. And so Raphael … found his earliest impressions of harmony and proportion and good manners in the court of Urbino. ” (Kenneth Clark: Civilisation  ch.4, p.87. London, Penguin, 1987.) Well, dear old Lord Clark probably knew very well that the silly old creature had brought his son up to be a courtier. Of course Clark knew Vasari’s biography of Raphael and his description of dear old Mr Santi which I quoted last time. He probably had seen Raphael’s draft of a poem in his elegant italic hand many a time in the British Museum (Cat 84 in the National Gallery exhibition), and knew that Raphael was a friend of intellectuals at the court of Urbino  such as Baldassare Castiglione, author of the Courtier, whose portrait he painted, and the humanist Pietro Bembo. So he tried to express this in a “popular” way.

The more you write about someone, the more fond you get of them, so I thought I would list some of  the places in Le Marche and elsewhere where you can see dear old Mr Santi’s work.

Note the similarity between the figure second from the spectator’s left and the Muse Clio in the Royal Collection below. 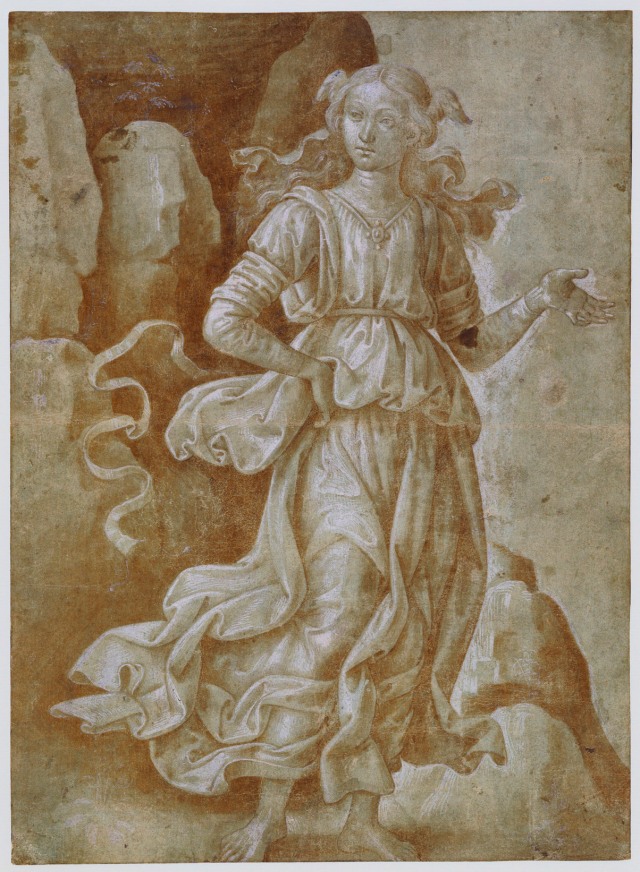 The Muse Clio or Woman Standing before Rocks. Thanks to the Royal Collection.

London, National Gallery (not on show)

The Virgin and Child

Madonna and Child, thanks to the National Gallery

Note the tilted oval of the Virgin’s head.

Santi often portrayed her in this way, for instance in his Annunciation, on display in Raphael’s birthplace in Urbino.

Annunciation by Giovanni Santi c 1490. Thanks to the Comune of Senigallia for the image.

The Dead Christ supported by Two Angels ( and many other paintings).

This particular painting is supposed to have been placed on the edge of the pulpit in San Bernadino degli Zoccolanti, the Montefeltro mausoleum. (Raphael from Urbino to Rome: London; National Gallery, 2004, cat 5, p76.)

9 Responses to More about Giovanni Santi, the artist Raphael’s father