I have chosen to use the title of a poem by Giacomo Leopardi, “Saturday in the Village” (Canto XXV) as a title for this post.

The poet Giacomo Leopardi was born in Recanati  in 1798; here he spent his childhood and youth reading in the library, collected by Monaldo,  his father. It is open to the public; you don’t need to make a special request. Thanks to Alex of Send In the Librarians (a great joint blog, by Alex and Victoria, for lovers of books and libraries – and cats) for telling me this. Without you, Alex, I might never have got round to visiting the Biblioteca of Casa Leopardi.

Saturday was fairly cool and damp, a good day for urban sightseeing, so we decided to drive down to Casa Leopardi. The library overlooks a little piazza, the piazza of the poem, and when you read Canto XXV you can imagine the young Leopardi gazing down at the bustling piazza – a bustle from which he was for ever excluded by his station in life.

A few lines from the Canto are carved on the building, which was the servants’ quarters, opposite the Casa Leopardi.

“The crowd of children shouting in the little square, and leaping here and there, make a happy noise.”

Saturday is in some ways a good day for sightseeing, because you often get a bonus in the form of a wedding. This particular Saturday a wedding was taking place in the church adjacent to the Leopardi house.

I know the captions below, from “Il sabato del villaggio”, are quoted out of context, but I couldn’t resist them. Although Leopardi wasn’t describing a wedding at all, his words seem to fit. 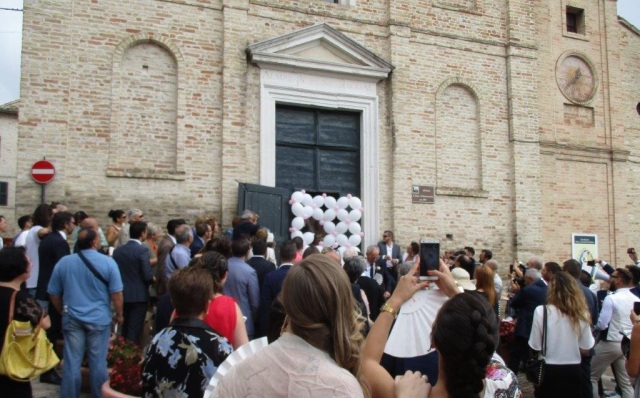 “This day is the most welcome of the seven, full of hope and joy.”

And here is the bride.

“… and she holds in her hand A bunch of roses and violets” (No violets, actually).

There was a modest bar in the square  where the Chelsea Fan had an excellent cappuccino, in the late morning – shock horror.  I think if you want a cappuccino you should ask for it; never mind about  the done thing.  Do they want your money or don’t they? The Englishwoman is obviously a foreigner whatever she does, anyway .

In the bar we fell into conversation with a wedding guest  (no, he wasn’t a bit like the Ancient Mariner). He pushed in front of me in the queue and I glared at him in my best Paddington Bear fashion. The Chelsea Fan could feel the heat from the other side of the room.  He, the wedding guest, instantly apologised and made way for me.  We take queuing seriously in Le Marche.

Following this encounter I heard him talking about “la Brexit” with his friend and raised my eyebrows.  Oh scusi,  was he in the way of the Signora’s cappuccino? I said no, we were English and had heard them talking about Brexit. He made a remark which I didn’t catch but later we were standing near each other and he observed to his friend “Questi signori sono inglesi”. I took this as an invitation to chat, and it was interesting to hear how fed up they were with the EU. They didn’t seem to resent the vote to Leave at all.

The bride and groom eventually  appeared at the top of the steps, having burst their way through the screen of pink and white balloons.

“This blooming age Is like a day full of happiness, A clear, sunny day, Precursor to the festa of your life.”

The kiss was the signal for us to join the queue for entry tickets to the library and the exhibition. After about half an hour we arrived at the desk and received the same painstaking and polite explanation as everyone ahead of us in the queue.  The upshot of it all was that we had to be back at 2 for the library tour. After a hurried lunch in the first restaurant we found, served by harassed and unsmiling staff ( they weren’t hurrying ), we made it just in time.  I told you the Chelsea Fan hates looking for restaurants at lunchtime!

I’ll post something about the collection in my other blog.

The guided tour was of course aimed at Leopardi fans, not librarians, so I’ll pass on to you some of what I gleaned about his life. The poet spent most of his youth in the library,  where, among many other studies he taught himself Greek and Hebrew from the rare polyglot Bible. A touching sight was the window

whence he used to look across to the servants’ quarters where Teresa, whom he called Silvia, sat singing over her weaving. She became the subject of Canto XXI, “A Silvia”, in which he rages against Nature for causing her early death and destroying her youthful hopes. 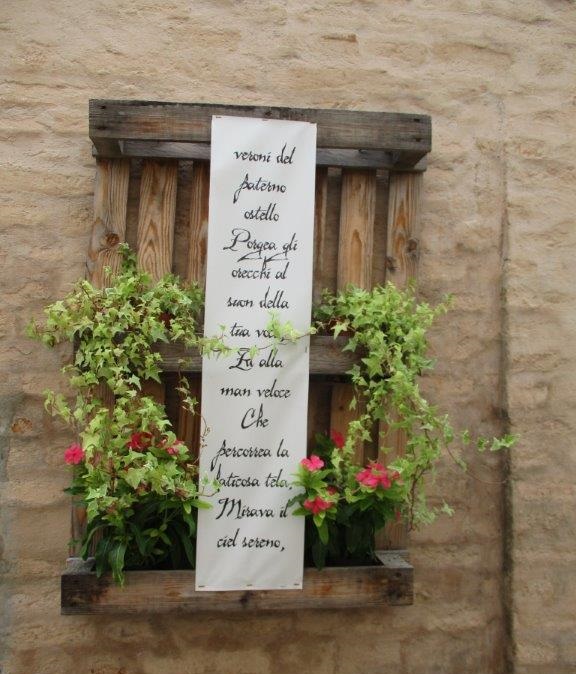 “From the balcony of my father’s house I used to listen for the sound of your voice And of your swift-moving hand Running across the wearisome loom. I used to look at the cloudless sky…”

Roll on the holiday! as Leopardi nearly said. What he actually wrote was “… ma la tua festa Ch’ancor tardi a venir non ti sia grave.” And I wish the same to all of you.

I have a holiday home in Corinaldo in the province of Ancona in the Marche region of Italy. I have been going there since 1993 and would like to share my love and experience of the area. I speak Italian. Ho una casa di villeggiatura a Corinaldo nella provincia di Ancona, Regione Marche. Frequento Corinaldo da 1993 e desidero condividere i miei affetto e esperienza della zona con gli altri. Gli italiani sono sinceramente invitati a correggere gli sbagli.
View all posts by An Englishwoman in Italy →
This entry was posted in Libraries, Poetry and tagged Giacomo Leopardi, Il Sabato del Villaggio, Monaldo Leopardi, Recanati, Silvia. Bookmark the permalink.