On the first Sunday in June we arrived at our little local church,  Sant’Apollonia, only a bit late (the Chelsea Fan has observed that Mass and football matches always begin on time in Italy), as usual, only to find it closed.We thought there must be a big service at San Francesco, the biggest church in town, at 11.15, so off we drove, only to find that all the car parks were full and we’d have to park outside the Crai supermarket and walk up to the Corso.

When we reached the  Corso we found crowds assembling and obviously waiting for something. Fortunately at this point we bumped into Signora Chiara, the widow of the late great Fausto of I Tigli restaurant. She explained to me what was going on. Of course, I had forgotten, it was the feast of Corpus Christi (Body of Christ), or Corpus Domini, as they say in Italy, when the townsfolk process through the streets behind the priest who carries the communion bread, which is the Body of Christ. First Communions also usually take place on the day of this festival. 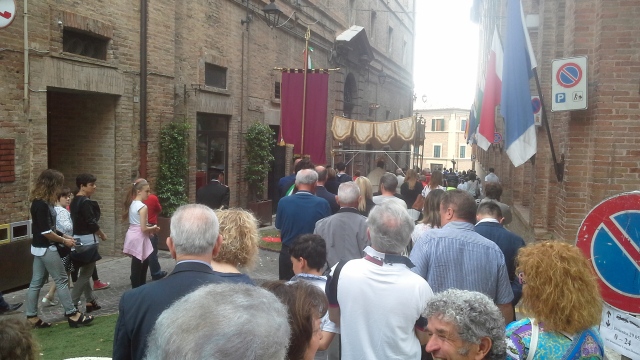 I first saw this procession as a teenager on my Gap Year in Perugia, and really liked it. Then I remember being in Corinaldo for Corpus Domini a few years ago, though I didn’t see the procession, but all the First Communion children coming out of church.

Signora Chiara also explained that nowadays there is not only a solemn procession on the day of Corpus Domini, but also an Infiorata, i.e. the streets are carpeted with flower petals. This is more common in Tuscany and Umbria, but is now spreading to Le Marche.

People stay up all night to finish the flower decorations, some of which are quite elaborate.

Actually you couldn’t avoid walking over some of the floral decorations.

It’s good to see so many of the townsfolk joining in. These religious festivals are all part of the way civil society expresses itself hereabouts.

The Mayor walks in the procession, taking a leading position near the Host under its canopy. 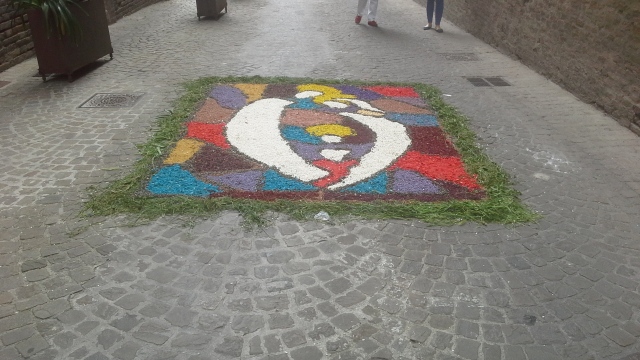 As well as joining in the procession, the Mayor also  creates a decoration, on  which he works very hard. I wonder if he made the one in the picture above.

Corinaldo’s corpo bandistico also takes part. These volunteers are present at many a festival and celebration, which wouldn’t be the same without their enthusiasm and high standard of playing. 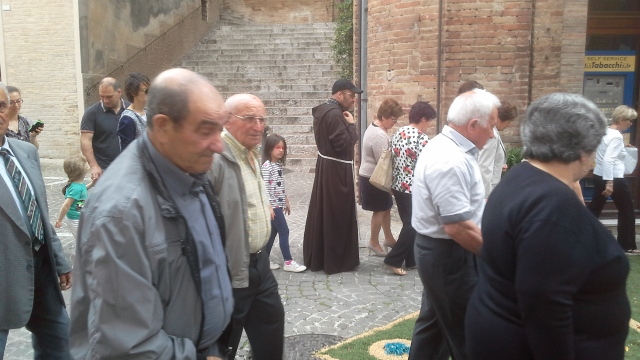 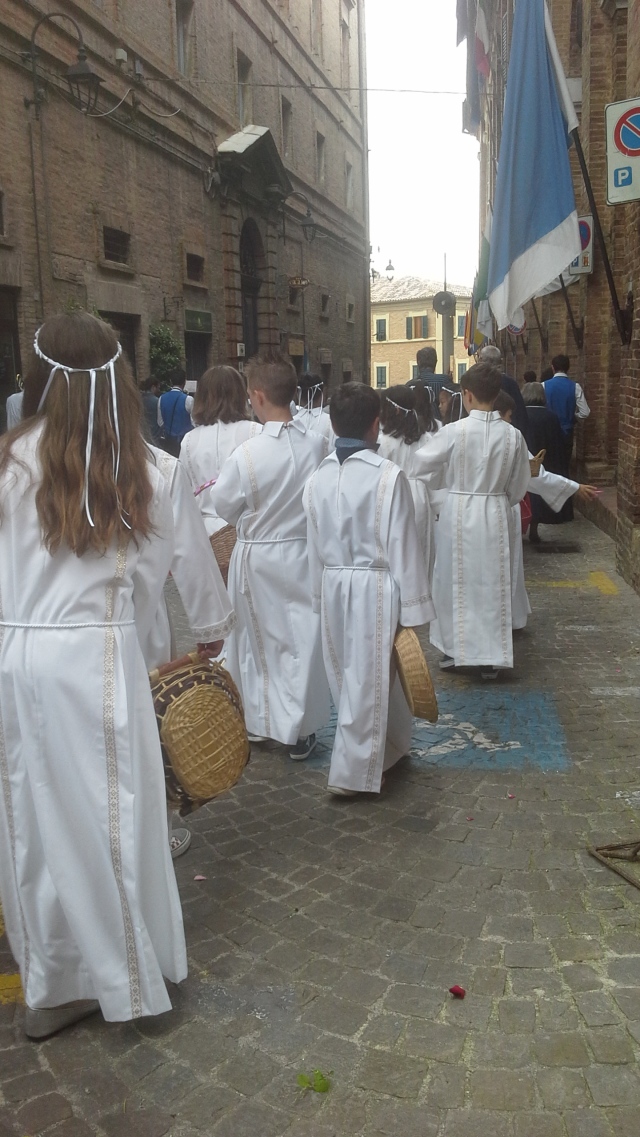 The First Communicants all wear simple white robes, so as to eliminate competition among the girls for the best First Communion dress.

The priest carries the Host in its monstrance under the canopy. 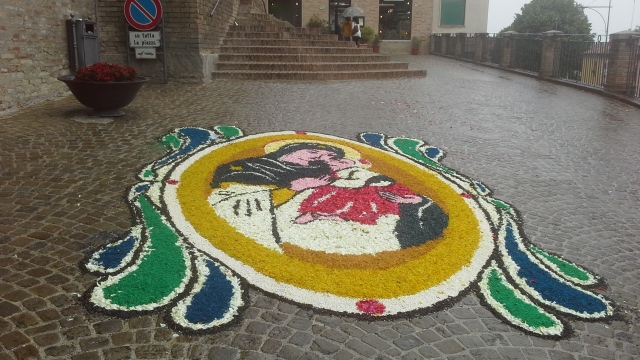 This is the last decoration before the procession reaches its destination, the church of San Francesco.

We have reached the church and the procession has come to its end.

It’s all over, and the rain held off till just before the end. The Mayor and Giorgia Fabri (the blonde in the black outfit), assessore alla cultura among other things, are chatting  with their friends and colleagues. We went off for lunch at the Nova Taberna, a new restaurant with a fresh approach to traditional local cooking that we are keen to support. More of them next time.

I have a holiday home in Corinaldo in the province of Ancona in the Marche region of Italy. I have been going there since 1993 and would like to share my love and experience of the area. I speak Italian. Ho una casa di villeggiatura a Corinaldo nella provincia di Ancona, Regione Marche. Frequento Corinaldo da 1993 e desidero condividere i miei affetto e esperienza della zona con gli altri. Gli italiani sono sinceramente invitati a correggere gli sbagli.
View all posts by An Englishwoman in Italy →
This entry was posted in Borghi dell'entroterra, Corinaldo, Festa, Hill towns and tagged Corpus Christi, Corpus Domini, Giorgia Fabri, Infiorita, Matteo Principi, Mayor of Corinaldo, Sindaco di Corinaldo. Bookmark the permalink.