Eugenio Morganti – the artist at work/l’artista a lavoro.

We were intrigued by this postcard and, as Corinaldo’s unofficial blogger, I decided to attend the private view, or rather opening – anyone could come. We arrived somewhat later than the advertised start time and waited. People drifted into the Terreno, the piazza at the top of town, and hung around chatting until the Palazzo Cesarini Romaldi should open its doors. In the photo below you can see: – Matteo Principi, the Mayor, Giorgia Fabbri, the portfolio-holder for culture (somewhat obscured, wearing beige trousers and talking to Professor Fabio Ciceroni in the pale blue jacket) and Giacomo Anibaldi (in green trousers on the left), member of the comune’s council.

When finally the doors opened, the event began with four speeches, from: – the Mayor, Professor Fabio Ciceroni, who is a distinguished local man of letters, the artist, and Giorgia Fabbri. We listened, but a lot of people, undeterred, just started wandering round and looking at the p-p-pictures, like Anthony Blanche at Charles Ryder’s show in Evelyn Waugh’s Brideshead Revisited. The good professor drew some wry smiles when in his speech he questioned the use of the word “evento” (event); some of us wondered what other word could be used to describe this … er … event. From the speeches we learned that Morganti is a local man; he lives in Cingoli but has childhood links with Corinaldo.

After the speeches and before actually looking at the pictures, we refreshed ourselves with a glass of wine and some excellent  stuzzichini (nibbles) from the table in the Terreno. 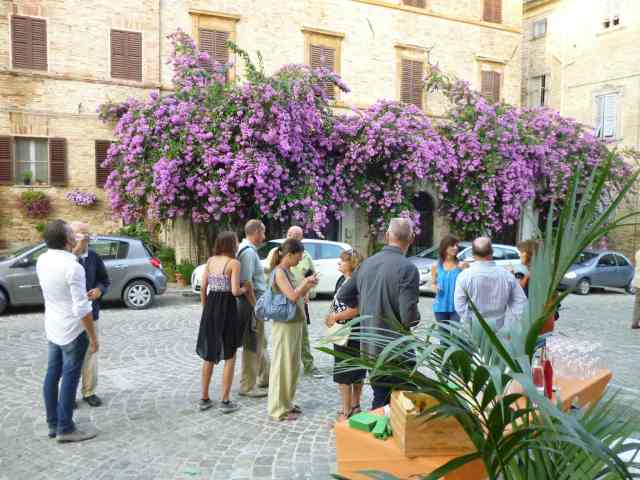 And now for the works of art. The artist is on the left expounding his work to a viewer. I was impressed by the way he made himself available to discuss his work.

Looking at the pictures/Guardando le opere.

In the picture you can see the fine vaulted ceiling. The Palazzo Romaldi stood abandoned and derelict for years, until it was bought and refurbished by a benefactor, Ingegnere (Engineer) Grimaldi. I don’t know if this is true, but I heard that although not local, he just couldn’t bear to see the state the place was in, so he bought it and restored it structurally and externally with his own money. Usually it is empty, but the ground floor has been used for small art exhibitions. Its unfinished aspect meant that it was particularly appealing to Morganti as a place to exhibit, as he told us in his speech.

Part of the installation below is the plaster cast Morganti was working on in the exhibition postcard. 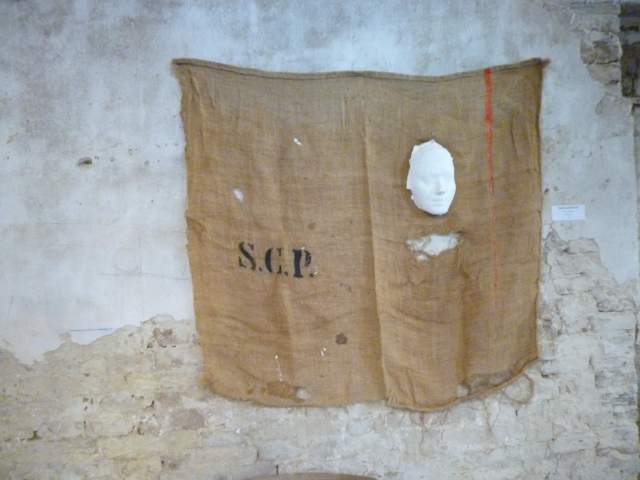 We liked Morganti’s use of photography in this work. 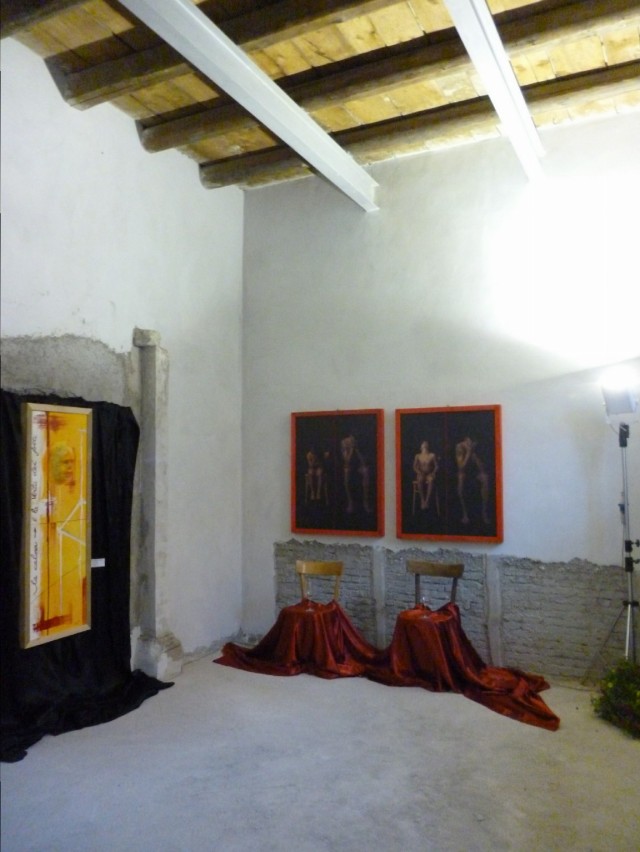 It represents his feelings about his relationship with his son, the most important of the good things he has achieved over the years.

I found Morganti’s work quite difficult to understand, especially his own and others’ commentaries are in quite abstract Italian. Do have a look at his Facebook page https://www.facebook.com/Eugenioilmorgantiarte, and comment here if you have any insights.

I have a holiday home in Corinaldo in the province of Ancona in the Marche region of Italy. I have been going there since 1993 and would like to share my love and experience of the area. I speak Italian. Ho una casa di villeggiatura a Corinaldo nella provincia di Ancona, Regione Marche. Frequento Corinaldo da 1993 e desidero condividere i miei affetto e esperienza della zona con gli altri. Gli italiani sono sinceramente invitati a correggere gli sbagli.
View all posts by An Englishwoman in Italy →
This entry was posted in 21st century Art, Borghi dell'entroterra, Corinaldo, Private Views, Vernici di artisti and tagged Eugenio Morganti, Giacomo Anibaldi, Giorgia Fabbri, Matteo Principi, Palazzo Cesarini Romaldi, Piazza Il Terreno. Bookmark the permalink.